Merrin Mae Fuentebella (whose mother named her after a romance novel character) is a force to be reckoned with. The first generation Filipina and Alhambra, Calif., native won the October 6, 2013 episode of Food Network’s Cutthroat Kitchen and took home $14,900, part of which she used to pay off a large portion of a student loan and to take a much-needed vacation with her husband. The former sous chef who has worked at Italian restaurant Sotto, Alma – named Best New Restaurant in America in 2013 by Bon Appétit – and Sqirl in Los Angeles, is on a new, exciting adventure as a soon-to-be mother whose baby boy Westin is due on August 17, two days before her 30th birthday. Fuentebella reflects on her pregnancy journey thus far and what she has been up to since her Cutthroat Kitchen victory was announced.

Fuentebella became passionate about food growing up while watching her father cook Chinese Spanish fusion food at home. After giving college a try, she dropped out to work in corporate finance. She found working from a cubicle stifling and quit to seek her niche. Fuentebella cooked at home to help her grandma who encouraged her to apply for culinary school. She took the leap in July 2008 to start her self-funded culinary education at Le Cordon Bleu in Pasadena, graduating in 2009 with knowledge of both savory foods and pastries. She is the first person in her family besides her mother to obtain a degree in higher education.

Fuentebella has faced many hurdles in her culinary career due to her 5’1″ petite height. At one of her first jobs, the chef and her colleagues would purposely put items out of her reach and gather around to watch her struggle to open a large can of tomato sauce with an industrial can opener. These challenges developed grit in her character.

Her competitive and tenacious nature (she competed in beauty pageants at 9 years old) led her to audition for food competition show The Taste on ABC. Although she was not selected, a Food Network casting agent who saw her audition contacted her to be screened for Cutthroat Kitchen. Fuentebella credits her toughness and ability to make the screening panel laugh as reasons why she was cast for the “Kiss my Grits” episode of the show. The Cutthroat Kitchen champion’s victory demonstrated her ability to strategize and cook high quality dishes with limited time and sabotages that competitors threw her way. 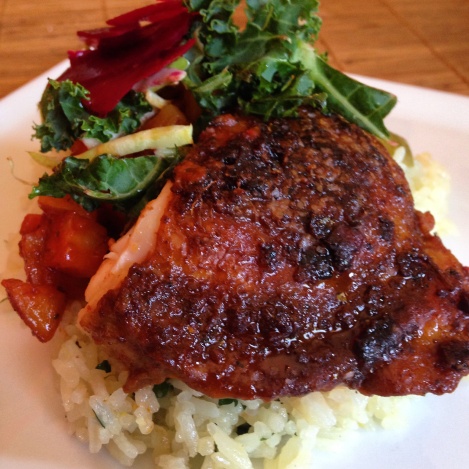 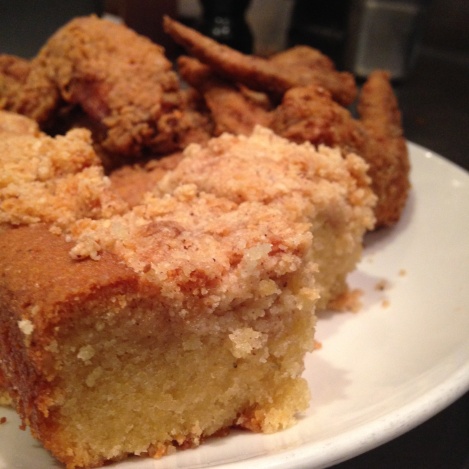 Fried chicken wings & cinnamon coffee cake: a play on chicken & waffles. Merrin Mae cooked 1-2 daily family meals with no repeat dishes for the staff at Sotto while she was sous chef.

Since her win, she has shifted her focus from being a sous chef that works 12-hour days to other food related endeavors, preparing for motherhood, and caring for her father-in-law who has lung cancer. She and her husband, Travis, recently moved from Alhambra to Monrovia to live with her father-in-law. “We can only hope for the best,” said Fuentebella. “While he’s here, we’re trying to make the most of it.” Westin will be her father-in-law’s first grandchild and her parents’ eighth grandchild.

Fuentebella met her husband 12 years ago. She recalls the time when they were at a crossroads in their relationship. They took a trip to a Westin hotel in San Diego and decided during that trip that they would stay in a committed relationship with each other. They chose to name their son Westin to memorialize that special time in their journey.

During her first trimester while working at Alma, she realized she would not be able to continue her job. “With my pregnancy, I had to get used to the idea that my energy and stamina was not the same anymore. It takes a lot to make a human. That’s the reason I eventually called it quits at Alma.”

Her search for another job was a challenge. “A lot of people didn’t really want to invest in me at the time because I was pregnant. That was hard on me. The profession or career that I had put so much time and effort into and cared about held me as a liability and they didn’t have the same faith in me anymore.”

Eventually, Fuentebella was hired by Matthew and Ria Wilson, the husband and wife team at Sqirl. “I love them to death. They took me under their wing and didn’t hold it against me that I’m pregnant and might not be there.” After a few months, she transitioned full time to taking care of her father-in-law after he was diagnosed with cancer.

She enjoys cooking nutritious comfort foods at home every day as she did before the pregnancy. “I’m cooking every day still for my husband and I have to do something a little bit different for my father-in-law because chemo changes your palate. Since I’m so close to my due date now, I’ve been doing make-ahead meals to freeze so it’s easier to prepare for the transition.” 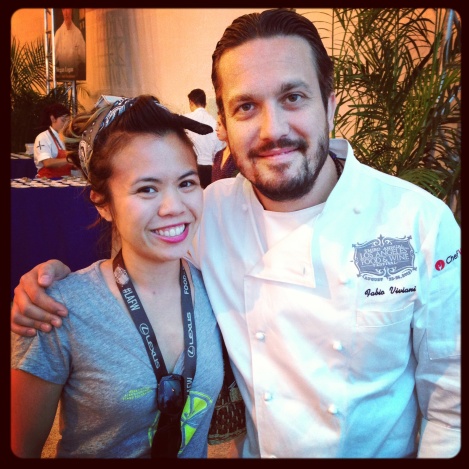 Fuentebella has fully embraced her new path. “My life was always about my cooking. I cared so much about my passion. Now to have a different avenue of meaning in life is completely and utterly exciting. You grow excited as you’re growing the baby.” She plans to make baby food when the time comes to feed her son solids and says she is excited to nurture in him an appreciation for food the way her parents did for her. In the meantime, she has introduced unique foods to him through her various cravings such as vanilla bean ice cream with homemade chocolate sauce and deep-fried tortillas as well as Flamin’ Hot Cheetos with cream cheese.

In addition to cooking daily, Fuentebella updates her YouTube channel and is collaborating with blog My Cookshelf as a columnist through which she covers food events and conducts interviews. “I’ve learned not to limit myself to just being a restaurant chef, although that is my home. I’ve tried catering on and off, and have been a private chef, but there’s something different about a restaurant. Since I’m probably not going to be able to do that, I’m trying to do other things with food like writing.” 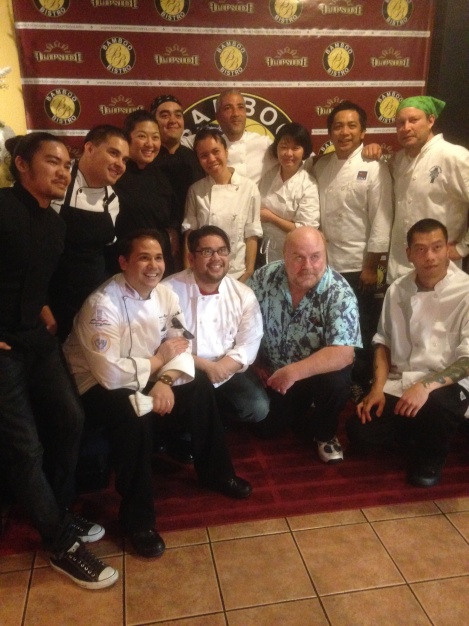 Merrin Mae (in center with her former Le Cordon Bleu instructor Chef Farid Zadi and wife Chef Susan Park) cooked a dish at an event to raise money for victims of the recent Philippines typhoon.

Fuentebella was also featured on former television show Kababayan LA and was offered a spot on two other food competition shows. “I had to turn them down because of my pregnancy. They wanted me to be gone for about five weeks. I would love to do the shows, but my priorities are different now. I told them to call me next season. I don’t want people to forget that I love to cook and to inspire.”