Artist and Le Petit Elefant owner Genevieve Santos perfected her ability to draw Disney cartoon characters while going to church with her Catholic parents. “I would take the weekly newsletter and the pencils you’re supposed to use to write on the donation envelopes and draw and not pay much attention. I mastered Goofy and I remember really trying hard to figure out how to draw Genie from Aladdin.” When Santos was a child, her dream to be a traditional animator for Disney motivated her to draw. She would tape her favorite cartoons on VHS, re-watch them frame-by-frame, and study the animation. Although she did not become a full time animator, her path has led her from an unfulfilling film industry job to realizing the importance of being an artist, starting her own successful business, and traveling the world.

Santos as a child at Disneyland

Santos grew up doing crafts at home in San Jose, Calif. with her special education preschool teacher mom and her younger sister who is also an artist. When it came time for college applications, she filled out applications for various animation schools including her dream school California Institute of the Arts. “All I had to do was drop it off in the mail. Maybe one of these days I’ll apply to see if I’ll get in. It’s scary to see that dream of going to CalArts and pursuing animation all the way through.”

Instead, she majored in biology during her freshman year at University of Southern California. “When I went in for orientation I soon found that I had made a huge mistake and discovered USC had an animation school.” She majored in communication and minored in animation, allowing her flexibility to take a variety of art classes.

After she graduated from USC, Santos worked at New Line Cinema in Los Angeles for two years as coordinator in the print and creative advertising department. While she was doing well with the company and had growth potential, she wasn’t happy and went out of her way to take animation workshops and drawing classes to become a better artist. “I would leave work in the middle of rush hour, and rush hour in LA is terrible. I would essentially be on the road for an hour just so I could catch a two-hour drawing session.” Although she wasn’t selling her art at the time, she realized how important being an artist was to her.

Toward the end of 2008, she was laid off because another company absorbed New Line Cinema. As part of the transition team during her last month with the company, she was paid double time along with severance. The money she saved allowed her to travel, move to New York to join her sister for nine months, and start Le Petit Elefant. The name of the business is a combination of two things she loves – elephants and the book Le Petit Prince.

“Moving to New York was probably the best thing that I could’ve done for my business. If I had moved there during the summer, I would’ve slacked off on doing my business. Because I moved there during the winter, there was nothing I could do except get my website done, the legal paperwork, get a bank account – all the terrible, not-so-fun parts of starting a business.” She started her business – an Etsy store at the time – focused on plush elephants. “I’ve always drawn, but it’s always been something personal for me.”

After New York, Santos lived in the Philippines for nine months with extended family members and traveled around Southeast Asia to do research and development for her business. She went to India to buy silks for her plush items and to Thailand to volunteer at an elephant sanctuary for a week. She filled four sketchbooks with elephant illustrations that later became prints and a guidebook for future items. 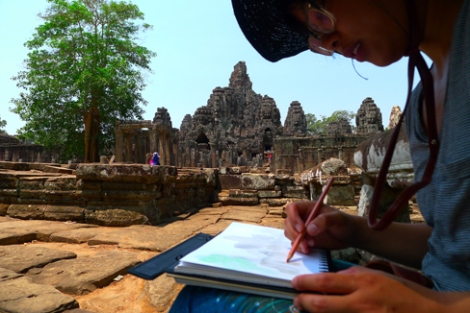 When she moved back to California she did her first craft fair, Renegade Craft Fair, in LA during summer 2011. Half of her inventory consisted of plush items and the other half prints and postcards. She sold out of all her printed artwork and sold one or two plush items. “That was a big wake up call; my art is sellable. I could make a business out of it and it’s actually a lot better for me because I could do one drawing, hit print, and it’s much more feasible. The business has changed a great deal because of that realization, but it’s for the better.”

It took some time for her to accept the business’s change of direction. She continued to sew plush and added art prints to her line. With every fair she worked she learned something new, including adding greeting cards featuring her artwork. “That’s one of the bigger sellers in my line right now. It’s a growing process. Now I have tote bags, rubber stamps, mason jars, stickers. It’s really fun to see how else I can sell and produce my illustrations.” She works between 10 to 20 shows each year across the U.S. 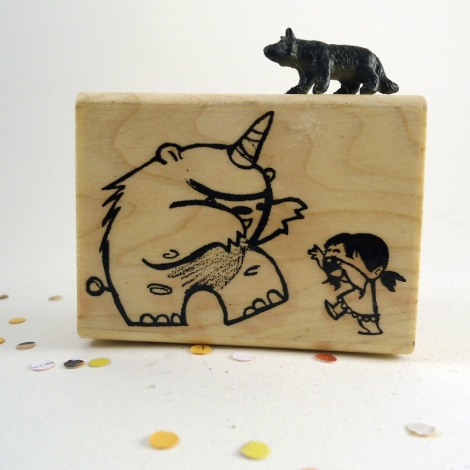 She typically uses a combination of blue animator’s pencil, tube watercolor paint, ink, and watercolor pencil to produce her artwork, which are often inspired by her romantic relationships. “Early on, all the blond boys that you see – that was an ex-boyfriend. The one that lived in New York – he’s in a couple of my illustrations. In terms of in my art, my current boyfriend is the Asian boy with glasses in the striped shirt. I draw from my relationships. I express my emotions, like how happy I am. In my relationship with Kevin, I’m not very affectionate, but you would never tell that from my artwork because that’s where the affection goes. I would never be that mushy.” When she needs to feel like a child again, she reads Roald Dahl books.

The best business advice Santos received was to get as much advice as you can from other people, hear their stories, and then ignore the advice. “Every path is different. I can’t feel bad because I didn’t go to CalArts and think I can never be a great animator. Everyone will get there in their own special way.” In the meantime, she enjoys creating animated GIFs for her newsletters. “Every time I animate something, it makes me really happy. I think it’s a long shot, but it would be really fun to do an animated series or to have my art inspire an animated series.”

Santos and her boyfriend Kevin

This summer she fulfilled a childhood dream when she was asked to be a part of the opening show of WonderGround Gallery, an art gallery at Downtown Disney. She created two original pieces inspired by Disney characters for the gallery, both of which were sold. “They found me through a craft fair so it was a nice lesson that I was doing the right thing. It was kind of nice that I got to check that off my list and got to work with Disney.”

Santos’ days vary depending on what city she is in. On her day off, she takes a weekly drawing class at the Animation Collaborative in Emeryville where classes are taught by Pixar, DreamWorks, and Disney employees. She will take a visual storytelling class taught by the director of Pixar/Disney’s film, Brave. “The animator in me is geeking out hard core.” She tries to draw regularly and works on two to four custom orders at a time. “If I’m really stressed I’ll buy a plane ticket somewhere. Some people stress eat and stress shop. I buy plane tickets.” 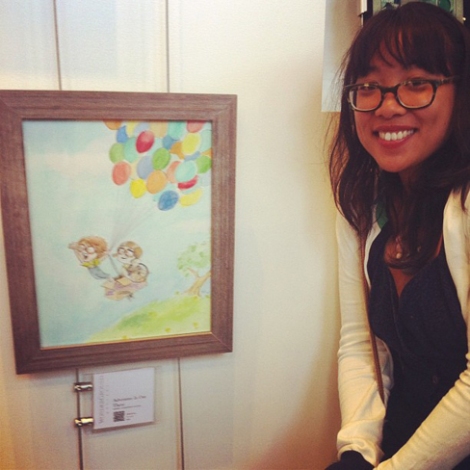 Santos with one of her original WonderGround Gallery pieces

She started traveling when she was 22 and especially enjoys traveling alone. Her favorite trip was to New Zealand where she rented a converted minivan for two weeks and slept in it. “I would park it at a campsite and in the morning make my tea and go hiking. It was awesome. I felt alive again. That was a big moment for me, just to feel completely alone and brave. I drew a lot.” At one point, she visited eight countries in four months. Before she turned 30 in July this year, her goal was to reach 30 countries by the time she turned 30. She was able to go to 31 countries including Denmark, Sweden, Norway, and Finland. “I did it with the money I had earned from my business. That was a huge moment for me that I’m deeply grateful for.”

Milestones in Le Petit Elefant include reaching annual business resolutions. This year, Santos wanted to do more art shows. She has been in 12 shows including the WonderGround Gallery. Another milestone was having her first pop up brick and mortar shop during the month of August through SJMADE, San Jose’s version of Renegade Craft Fair. “It’s a fun way of getting my toes wet without having to commit to a lease. They’re going to have another opportunity to do it for the holidays. It’s definitely a learning experience. It’s a lot of work. I’m used to working a lot and working long hours, but I’m also used to traveling and being able to go when I want and be in a different city the next day if I feel like it.”

Since she has a one-year working holiday visa to be in New Zealand in 2015, her next goal is to find a way to make her business more mobile. She says it’s a challenge to decide what her priorities are. Some of her illustrator friends are in stationery shows and publishing books. “I’m like, why aren’t I doing that? What am I doing wrong?” She can see herself opening a brick and mortar shop and illustrating children’s books later in life. “I do art so I can travel and I travel because I like to do art. Those two things are most important to me. As long as those two still exist and I can do them easily, then I’m happy. I have to figure out what the priorities are, doing shows here or going abroad.”

The biggest challenge she has faced was when her father had three strokes last summer. “It was in the middle of the craziest summer craft fair season I had ever had and I was even abroad for some of it. No one ever anticipates their parents being in the ICU. I always expect new challenges for my business, but having to balance family and work and trying to prioritize commitment – that was a brand new struggle. The show has to go on. You still have to do work. You can sulk and feel sad, but you still have to do it. Give yourself tough love.”

To Santos, success is, “doing something that makes me happy and being able to live off it.” Looks like she’s doing just that.

One response to “Genevieve Santos: Happy artist making a living”