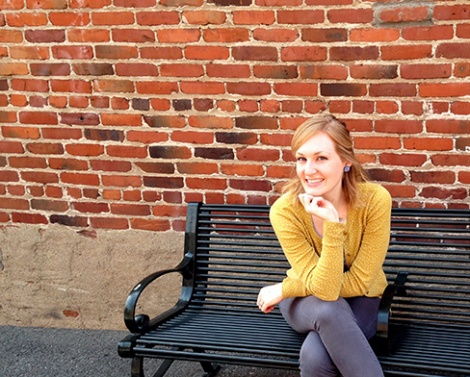 While Love, Meeksie handmade earrings Etsy shop owner Marika Reppas, 26, was growing up in the small tourist town of Leavenworth in Central Washington, she learned from her hard working parents that anything is possible. “They’ve always encouraged me to follow each and every one of my dreams,” said Reppas, whose dreams have included being a book editor, songwriter, and marine biologist. Reppas’ unique journey has included a creative writing major at Taylor University in Indiana, big box store retail jobs, office jobs, and the start of a speech therapy graduate program. When Reppas opened her first online shop in November 2009 as a hobby, she did not foresee having a thriving business that she would consider turning into a full time career.

Although Reppas was never exposed to art classes or made crafts growing up, her retail experience since high school and father’s entrepreneurship would later influence her entrepreneurial path. “My family has always valued hard work. My dad has owned his own small business for several years now and I’ve been inspired by his work ethic and willingness to take risks,” said Reppas.

Reppas worked at a Christmas and chocolate store during high school. She met her husband, Paul, during college while working at a summer fruit barn job in her hometown. Reppas first realized the value of purchasing from small businesses while working for Macy’s at minimum wage as a merchandiser during the months leading up to Christmas in 2009. “There was so much product. We did not have enough space to put it all out on the floor. I saw all the waste. Everything came in plastic. To just see all these people coming to buy this stuff and me knowing how much it’s marked up. I had to get up at 3:30 in the morning. I was hauling stuff. It was hard work. I was thinking I’d rather spend my money where I know the employees are treated well and that they’re loving their jobs,” recalls Reppas.

During that fall in November 2009, shortly after getting married and while trying to figure out what she would do after graduation, Reppas decided to try her hand at starting a small business via an online vintage shop. Her friend, whose nickname for Reppas was Meeksie, had told Reppas about Etsy when Reppas shared about her burning desire to start a boutique. “Later I went to the site and I was inspired by everything on the site. Etsy was still really new at the time. The only things they allow on the site are vintage and handmade. At the time, I wasn’t into crafts at all and didn’t know anything. I was in the middle of Indiana and there were tons of cute little second hand stores. I focused more on décor items and jewelry. I had a lot of fun doing that,” said Reppas.

Reppas developed her craft skills shortly after graduation while working in the scrapbook department of a craft store near her hometown conducting workshops, making paper flowers, cards, and displays. Reppas saw again the mass-produced nature of the products that surrounded her. “It was fun in a lot of ways, but after awhile it got kind of old.” Reppas decided to try her hand at creating handmade items by opening another Etsy shop in February 2011 that she named Love, Meeksie. “I wanted a name that was generic enough where I could sell anything, but I wanted it to have the connotation that everything’s made with love.” Reppas started with handmade fabric covered thumbtacks and earrings she learned how to make through Internet research. Her mother later taught her how to make tiny cubic zirconia earrings, one of the shop’s most popular items. Reppas has made it a priority to source her supplies – including vintage fabric – from other small businesses in the U.S. or thrift stores whenever possible. “I didn’t want to get in the rut of using the generic stuff that everybody buys and that you can get at craft stores. I wanted it to be high quality,” said Reppas.

Reppas decided to close the Etsy vintage shop when she realized that her new full time office job in Pasadena (where she and her husband had moved in 2010) made it difficult for her to take photos during the day of the vintage items she wanted to add to her shop. She also decided to focus her energies on her handmade shop by making more earrings since sales for earrings were picking up.

Meanwhile, Reppas was still pondering what to do with the rest of her life. Although she had studied creative writing in college because she enjoyed writing, she was unsure about her career path. She began to look into speech therapist programs, a path that was highlighted through career tests she took. In retrospect, Reppas wishes entrepreneurship was one of the pathways offered by the career tests. “That’s really where my heart is. I’m so much more motivated working for myself and having the freedom to come up with things to sell. There’s also anxiety in it because you don’t know if something will work out, but it’s so much more rewarding when something sells well. I just kept doing my Etsy thing slowly but surely. I really loved doing my business, but I never really thought it could go anywhere,” said Reppas.

A self-proclaimed “Pinterest addict,” Reppas says she also draws her inspiration from nature. “I grew up in a really small town with lots of nature around me. There were mountains, rivers, pine trees, and beautiful four seasons. I’ve always had that in my heart. I used to have a horse. We used to live on a couple acres of land. I have a lot of florals in my shop. I’ve always been drawn to more feminine styles, like lace and silk. Since living in Los Angeles, my style has changed a little bit. You’ll see different fabrics I’m drawn to now. I’ve had other people describe my style as feminine and bohemian. It does change,” said Reppas.

Reppas says the best business advice she’s learned from Etsy’s forums and seller blogs has been to make things she would want to buy. “If you like it, chances are other people are going to like it. Usually, I just start imagining things I would like for myself and then I start taking steps to make them. I’ve always been into earrings. I hated when earrings were really heavy and weighing down my ears. I wanted to get something that was lightweight.” In the future, Reppas plans to learn how to solder jewelry.

The biggest challenge Reppas has faced in running Love, Meeksie has been balancing her full time job at the same time. “It helps that I’m just so excited about my business. It doesn’t really feel like work to me. I’d get home from my day job and be ready to work. I’ve gotten so much faster because I’ve been doing it for three years now,” said Reppas. The support of Paul – a full time seminary student – has been helpful. As sales quadrupled every year, Reppas began to seriously consider turning her business into a full time career. When Reppas first started, she had four items in the shop. Now, there are nearly 100 items that have included sales from customers in 19 different countries.

Despite the phenomenal growth of her business, it has been a process for Reppas to come to terms with the possibility of not finishing her graduate speech therapist program or having a traditional career. “In the past, I couldn’t focus on the business because it was supposed to be a fun thing, not a career thing. Now that I’ve become more okay with accepting this can be a career, that’s been better for my business and my own life satisfaction. I don’t have to have a fancy degree to make myself feel validated.”

Reppas looks forward to adding items to her shop, setting more goals, possibly starting her own website, and her husband’s completion of his graduate program. She plans to continue her home-based business in the future when she and Paul start a family. “The possibilities are endless,” says Reppas with a smile.

The owner, maker, designer, copywriter, and photographer shared some additional words of wisdom on:

The biggest lesson learned in running a business